Lester S. Rosen is a nationally recognized expert on background checks and employment screening. He is an attorney and CEO of Employment Screening Resources (www.ESRcheck.com) a leading national pre-employment screening firm accredited by NAPBS.

Mr. Rosen graduated UCLA with Phi Beta Kappa honors, and received a J.D. degree from the University of California at Davis School of Law, serving on the school Law Review. After practicing in a large Los Angeles law firm for three years with an emphasis in civil litigation and employment law, he joined the Riverside County District Attorneys’ office. His duties included career criminal and homicide prosecutions. He opened a private criminal law practice in Marin County in 1985. He specialized in criminal law and his practice has included federal crimes and death penalty cases. He holds the highest attorney rating of A.V. in Martindale-Hubbell. He has served as an adjunct professor of law teaching criminal law and procedure at Hastings College of the Law, and has served as a faculty member and program chairman of the nationally recognized Hastings College of Trial Advocacy.

In 1996, he established Employment Screening Resources (ESR) www.ESRcheck.com , dedicated to promoting a safe and profitable workplace for both employers and employees. In 2003, that firm was rated as the top screening firm in the US in the first independent study of the industry in a research report prepared by the Intellectual Capital Group, a division of HR.com.

He is a consultant, writer and frequent presenter nationwide on pre-employment screening and safe hiring issues. His speaking appearances have included numerous national and statewide conferences. He has qualified and testified in the California Superior Court as an expert witness on issues surrounding safe hiring and due diligence. In 2000, he testified as an expert on background screening on behalf of the plaintiff in a case where the jury awarded 9.3 million dollars to the family of a doctor murdered by a carpet cleaner who was hired without any background investigation.

He is the author of: “The Safe Hiring Manual.” (Facts on Demand Publications). That book was first published in 2004, and the second edition was published in 2012. He is also featured as the narrator in a 23-minute training video by Kantola Productions called, “Safe Hiring: How You Can Avoid Bad Hires.”   Mr. Rosen was the chairperson of the steering committee that founded the National Association of Professional Background Screeners (NAPBS) a professional trade organization for the screening industry which has nearly 300 members. He was also elected to the first board of directors and served as the first co-chairman in 2004. 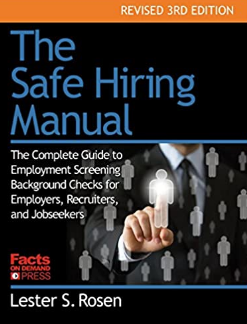 
Warning: Undefined variable $moreLink in /var/www/html/wp-content/themes/gradcareerfestival/single-speaker.php on line 244
If you are looking for a job its’ not only your resume you need to pay attention too.  Lester will share tips and strategies you can use to clean up data and information that is…