Federico Pistono is social entrepreneur, computer scientist, award-winning journalist, author, scientific educator, activist, and public speaker. He holds a BSc in Computer Science from the University of Verona, and in 2012 he graduated from Singularity University, NASA Ames Research Park.

His research has been utilized by major economic institutions, universities, and think tanks, such as the Society for Human Resource Management in collaboration with The Economist Intelligence Unit, and the Future of Jobs Summit in California.  He has ten years of professional experience in a variety of difference fields—IT Management, System Administration with Unix and Linux systems, Web Development, Product Management, UX design, Human Machine Interaction, Journalism and Science Reporting, Editing, Screenwriting, and Directing.

He’s Founder and CEO of Konoz, a website where one can learn anything for free and support their favorite YouTube creators. He’s author of the Amazon best-selling book “Robots Will Steal Your Job, But That’s OK: How to Survive the Economic Collapse and be Happy” and the Sci-Fi Novel “A Tale of Two Futures”.

Federico has extensive experience with grassroots activism since the age of 19, having founded and coordinated social movements and non-profits to promote sustainability around the world. He’s member of the Science Advisory Board of TEDxBologna, Founder and Honorary President of “Association Sustainable Society”, Founder of TEDxVerona, Founder of Axelera, and Founder of The Zeitgeist Movement (TZM) Italy — TZM has half a million activists in more than 100 countries.

He routinely tours around the world, lecturing on exponential technologies at Fortune 500 companies, conferences, universities, and symposia; such as Qualcomm, Telenor, the University of San Paolo, the University of Oslo, the International Education and Resource Network Summit, TEDxVienna, and Singularity University. He was interviewed by several newspapers, radios, TVs, and magazines, among which are The Huffington Post, The Wall Street Journal, Vice Magazine, Folha de S. Paulo, Italian National TV; while he wrote for the Institute for Ethics and Emerging Technologies, The Work Foundation, Il Corriere della Sera, and Forbes Magazine. 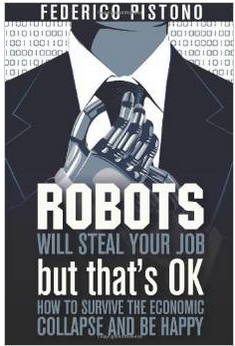 Robots Will Steal Your Job, but that’s OK! How to Survive the Economic Collapse and be Happy!


Warning: Undefined variable $moreLink in /var/www/html/wp-content/themes/gradcareerfestival/single-speaker.php on line 244
You are about to become obsolete. You think you are special, unique, and that whatever it is that you are doing is impossible to replace.  You are wrong. As we speak, millions of algorithms created by computer…