Before making the transition into the non-profit sector in 2002, the majority of Wendy Walleigh’s career was in high-technology marketing and sales. Over 20 years, she held numerous positions in computer networking hardware and software companies including Director of OEM Marketing at 3Com Corporation. Her responsibilities included product marketing and management, branding, marketing communications, sales and sales support.

In 2002, Ms. Walleigh left the high-technology world and joined Junior Achievement of Silicon Valley where she held the position of Vice President of Marketing and Development until 2006 when she and her husband moved to Africa to do volunteer work for TechnoServe, an international economic development NGO (non-governmental organization).

From July to December 2006 in Swaziland and all of 2007 in Kenya, she helped develop entrepreneurship programs for TechnoServe supporting youth, women, micro-enterprises and business plan competitions, including helping to establish Junior Achievement youth programs in Swaziland. While living again in California, Ms. Walleigh returned to Africa in 2008 and 2009 to travel informally as well as to visit TechnoServe clients in Ghana, Swaziland and Kenya and document their success stories. She returned to Junior Achievement of Silicon Valley as a Board Member and continues to serve in that role.

Ms. Walleigh holds an M.S. in Communications from Boston University and a B.S. in Psychology from Tufts University.

In 2005, Rick Walleigh left a 30-year career in the high-technology industry. During this time he held executive roles in high-technology companies and was a Partner in management consulting at Ernst & Young for twelve years. During his career, he frequently gave executive presentations and wrote a number of articles on business topics. Two of his articles were published in The Harvard Business Review.

After what he calls “commercially retiring” in 2005, Rick began exploring opportunities to use his skills and give back to society. He discovered the volunteer consulting program at TechnoServe and went to Africa, with his wife Wendy, to work on reducing poverty. Now back in the US, he continues to work part-time for TechnoServe as a Senior Advisor to the Chief Operating Officer and other members of TechnoServe’s senior management team.

Because of his transition from high technology executive to volunteer in Africa, Rick was featured in a Wall Street Journal online edition article titled “Second Acts: Career Paths For Worn-Out Executives” available at http://walleigh.com/africa/ricks-15-minutes-of-fame-in-wall-street-journal.

In addition to Ernst & Young, Rick is an alumnus of the Massachusetts Institute of Technology (MIT) and the Harvard Business School. 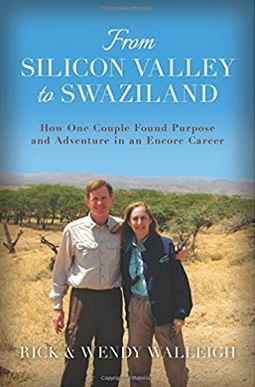 From Silicon Valley to Swaziland: How One Couple Found Purpose and Adventure in an Encore Career


Warning: Undefined variable $moreLink in /var/www/html/wp-content/themes/gradcareerfestival/single-speaker.php on line 244
Wendy and Rick will share their experiences, from the challenges of day-to-day existence in an unfamiliar culture to the joys of helping people in poverty grow their own businesses. If you’re thinking about transitioning to…