Marilyn Myrick Watson is the recipient of The Arizona Centennial Legacy Project designation for her contribution to the state’s centennial by the writing of five biographies for children. Her biographies of famous Arizonans include Barry Goldwater, Rose Mofford, first female governor in Arizona, Raul Castro, first Hispanic governor, Frank Luke, Jr. and Poston & Hunt, Arizona’s Founding Fathers. She was nominated as Phoenix Woman of the Year for this project.

Born in Steubenville, Ohio, she is the daughter of an avid reader. She received a B.S. in Education and Library Science from Miami University. After moving to Arizona, Watson earned her M.A. in Counselor Education. After five years of classroom teaching, Marilyn became the school librarian; a position she lovingly held for twenty-five years. She is the proud mother of four grown children and nine grandchildren.

She has been actively involved in developing libraries overseas. Her first international library work was on an island in Lake Titicaca, Peru with The Paradise Valley Reading Council. Later she was involved with a small NGO in Kenya bringing libraries to rural areas. She still returns to do in- service classes for teachers so they will learn to utilize the libraries more. In her spare time, she volunteers teaching a class on Purpose and Potential to those seeking to climb out of poverty and despair and does other community volunteer work.

While living in Germany for two years, she acquired a love of traveling and her suitcase is packed and ready. Her expertise in retirement for baby boomers began as she was retiring and found only material on the subject of financial planning for retirees. Encore! is a compilation of her years of research and teaching. She is a Speaker and Life Coach for those in transition. You may contact her for speaking to audiences both large and small or for coaching. Her contact info can be found at www.MarilynMyrickWatson.com. 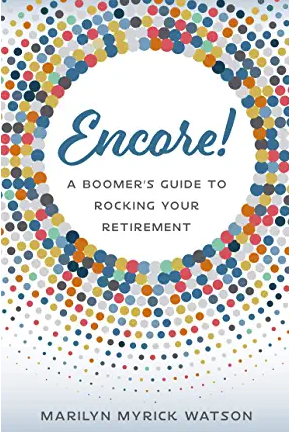 Encore: A Boomers Guide to Rocking Your Retirement


Warning: Undefined variable $moreLink in /var/www/html/wp-content/themes/gradcareerfestival/single-speaker.php on line 244
You sailed through the 60’s and 70’s living and loving your music, got down to business in the 80’s, 90’s and 2000’s raising your family advancing your career.  Now it’s time to make your retirement…