Eric Tyson is a best-selling personal finance book author and has penned five national best sellers. He is also the only author to have four of his books simultaneously on Business Week’s business book bestseller list.

His Personal Finance for Dummies, a Wall Street Journal best-seller, won the Benjamin Franklin Award for Best Business Book of the Year. Eric’s syndicated newspaper column is read by millions of readers weekly. He is a former columnist and award-winning journalist for the Sunday San Francisco Chronicle. His website, www.erictyson.com, rocketed into the top one percent of financial websites within its first year of operation.

Tired of working as a management consultant to Fortune 500 financial service firms which more interested in maximizing short-term profits than in providing sound financial products and services, Eric founded in 1990 the nation’s first financial counseling firm which works exclusively on an hourly basis. He started his new company with a simple mission: to provide objective, cost-effective personal financial advice, especially to non-wealthy Americans. Through family and friends, Eric had seen many otherwise intelligent people make horrendous mistakes in managing their money, in part, because the failure of our schools and colleges to teach personal finance.

In addition to his counseling work, Eric also hoped to make an impact in the writing and media fields. Much of the personal finance writing and reporting he saw and heard was biased, jargon-laden and, in some cases, filled with bad advice. For example, rather than telling people the hard truth – that one must live within one’s means as a prerequisite to building wealth – many publications offer up hyped and unrealistic “get rich without making sacrifices or taking risk” type approaches.

In addition to his writing and counseling, Eric also taught the nation’s most highly attended personal financial management course at the University of California. He has spoken at many corporations and non-profits. His educational background includes having earned his bachelor’s degree in economics at Yale and an MBA at the Stanford Graduate School of Business.

Eric is the only best-selling personal finance author who has an extensive background as an hourly-based financial planner and who does not accept speaking fees, endorsement deals or fees of any type from companies in the financial services industry or product or service providers recommended in his articles, books and his publications. 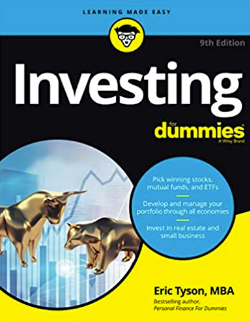 Investing for your future is wise and essential, but you need to have a basic understanding of the opportunities, risk, as well as what information and people you can trust.  Eric will give you the confidence…