Dave Gowel is the CEO of RockTech, a tech company with a platform that’s making the business web easier to use. Dave is a graduate of the United States Military Academy at West Point and of the U.S. Army Ranger School and a veteran of Operation Iraqi Freedom. Dave honorably completed his active duty military service while teaching military leadership as an assistant professor at the Massachusetts Institute of Technology (MIT).

Departing his full-time role at MIT in 2008, he started his civilian career by training professionals on how to get more from social technologies, especially LinkedIn, eventually achieving the title of the LinkedIn Jedi in the Boston Globe and Inc.com. More recently, he was featured in Entrepreneur Magazine for his success in using LinkedIn to close new investor relationships.

In 2010, Dave cofounded RockTech to develop software that brings scale to the training he previously delivered for small groups and individuals. When companies use RockTech, they no longer need to invest the money or energy in the ineffective classroom- and webinar-based technology training that is pervasive in corporations of all sizes around the globe.

Dave is also the author of The Power in a Link: Open Doors, Close Deals and Change the Way you do Business Using LinkedIn (Wiley 2011). 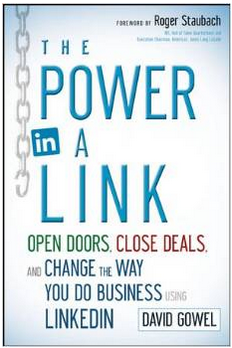 The Power in a Link: Open Doors, Close Deals


Warning: Undefined variable $moreLink in /var/www/html/wp-content/themes/gradcareerfestival/single-speaker.php on line 244
LinkedIn started slowly in 2005 and quickly exploded to become the world’s largest directory of working business professionals. By now, you know the power and potential to build your own personal network, but are you…