Since 1992, Chaz Austin (http://chazaustin.com) has been an advisor to companies on e-commerce strategies, integrated media, and online marketing. He is also communication and digital media educator and curriculum designer, as well as a public speaker, a columnist, and a journalist.

Chaz was the vice president of the Los Angeles chapter of the International Interactive Communications Society (IICS), the leading professional association in the field, from 1992 to 1993. In 1994, he was elected the IICS’s international vice president. He was also a member of the Board of Governors of the Academy of Interactive Arts and Sciences from 1993 to 1996.

As one of the very first new media agents in the industry at The Agency for the Performing Arts in 1995, Chaz attracted clients that included Hal Holbrook, Greg Roach/Hyperbole Studios, Brilliant Media, Robbie Weaver, Borst & DePalma, and Rupert Holmes.

Chaz has been an instructor in the Entertainment Studies Department at UCLA Extension since 1998. He also teaches at Brooks College and The Art Institute of California—Los Angeles.

Chaz has written about convergence as the HollywoodNet’s “Hollywood CyberPro” columnist (http://hollywoodnet.com/Austin/index.html) since 1997. He was also the convergence features columnist for Digitrends.net. His articles have been published in The Antenna—The Broadcaster’s Guide to the Internet, Billboard, CyberSweeps, Direct Marketing News, InterActivity, NAB Interactive Insights—A Multimedia Compendium, Networker@USC, New Media, Video Store, and WWWiz.com, among others.

He earned a Bachelor of Arts degree in sociology from The City College of New York, and a Master of Arts degree in broadcast communication arts from San Francisco State University. His master’s thesis was entitled, “An Analysis of Marshall McLuhan and His Theories About Television.” 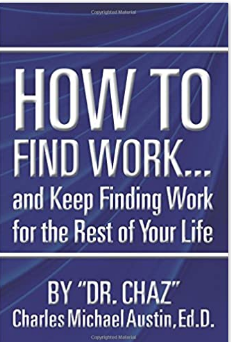 How to Find Work . . . and Keep Finding Work for the Rest of Your Life


Warning: Undefined variable $moreLink in /var/www/html/wp-content/themes/gradcareerfestival/single-speaker.php on line 244
Chaz will help you find the confidence in yourself to go after the work and lifestyle you deserve. You will learn how to take inventory of your skills, knowledge, and experience and how to leverage…