Antonia Gimenez is a Lead Business Architect, Consultant and Author. She is co-authored in the book Women Who Empower. A collection of 30 women’s stories to reconnect, uplift and empower within your personal and professional journey.

Antonia Gimenez have gained extensive experience in strategy execution through employing the new Business Architecture Target Operating Models discipline. She has pioneered and supported C-level executives, and global organizations have successfully executed her proposed strategic methods after being approved at the board level. Methodologies have been developed to maximize benefits, enabling the creation of economies of scales, centralization, digitalization, niche creation and differentiation strategies, uniqueness, growth, and revenue generation while improving margins and reducing costs. She owns her consultancy in London.
She possesses an Executive MBA from Imperial College (2015). Her dissertation on Business Architecture and Target Operating model [Strategy to Execution and Innovation] received an A with distinction.
She has received a global recognition award for her strategy execution methods.

Antonia Gimenez is a #1 international bestselling and multi-award-winning author. She is also a well-recognised strategy execution expert with a strong track record of more than two decades helping business leaders, from entrepreneurs to enterprise executives to help them to build a disruptive business that differentiates them from their competitors. By focussing on the execution, they have been able to overcome the current 70 percent failure rate for strategic transformation projects. She is the founder and CEO of Execute the Future Limited, a consulting firm based in London.

She first entered the business when she was just 12-year-old and partnered with the multinational cosmetic, skincare, fragrance and personal care company AVON helping them to build their regional customer acquisitions and sales worldwide. Entrepreneurial initiatives have continued to happen ever since. In the year 2000, I was offered another entrepreneurial venture where I pioneered a new international business for the American multinational software company ADOBE Inc. This high profile required me to have a lot of responsibility but also allowed me to hold multiple hats, for instance, I was performing multiple roles for the venture such as the visionary, the marketer, the engineer, the manager, and customer relations.

In 2008, she identified a crucial need for helping businesses to recover quickly from the worst financial crisis ever. She took her biggest risk to date: leaving a secure and high-paying corporate job during the worst economic disaster since the Great Depression of 1929. She took the lead and pioneered a newly born discipline – Business Architecture and Target Operating Models.

She has gained extensive experience in strategy execution through employing the new Business Architecture discipline, empowering large and SME organizations to successfully execute strategy e.g., maximize benefits, enabling the creation of economies of scales, centralization, digitalization, niche creation and differentiation strategies, uniqueness, growth, and revenue generation while improving margins and reducing costs. She has helped many businesses by partnering with tier one consultancy firms such as Tata Consulting, CAPCO, PWC where she also received global recognition awards for her impressive contributions to previously unresolved issues.

Antonia received her BA (Hons) degree in English Linguistics from Granada University in Spain and Cardiff University (1999), Master’s Degree in Translation, Economics and Finance from Surry University (2002), Postgraduate Diploma from CEA Confederation of Business Administration (2000), Certified Advanced Green Belt Lean Six Sigma (2010) and her Executive MBA from Imperial College (2015). Her dissertation on Business Architecture and Target Operating model [Strategy to Execution and Innovation received an A with distinction. She was strongly advised to published on the method in 2015. Her book on Business Architecture Target Operating Model is currently on the publication process. 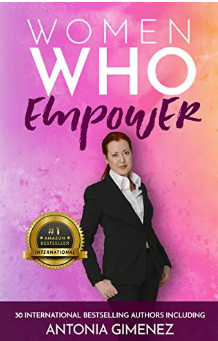 
Warning: Undefined variable $moreLink in /var/www/html/wp-content/themes/gradcareerfestival/single-speaker.php on line 244
Antonia interviewed dozens of women from diverse backgrounds and occupations.  All had one thing in common.  Despite all odds they have persisted in the face of challenges and insisted on building a better future.  You can…